The Biggest Thing you Missed at Podcast Movement, Or How I Got 2000 Subscribers in One Day

A lot of podcast vendors went to Podcast Movement and they did a few drawings and gave out a lot of prizes. For instance, here’s one booth giving out prizes.

If you haven’t tried to win this #PodcastKit yet, then are you really even at #PM18? Booth 52. Go. Now. pic.twitter.com/vJwMVlYxwB

That’s cool and all, but I don’t need a mic, I’ve got one. So prizes like this don’t attract me at all. But there was one vendor who had AMAZING PRIZES!

If you're going to @PodcastMovement next week and want your #podcast to be featured in @Castbox_fm, be sure to stop by the our booth #24 to use our photo booth. See you all soon! #RockTheCastbox #PM18 pic.twitter.com/oTDh9piacd

When I saw this, my jaw dropped. “HELL YES I WANT TO BE FEATURED! ARE YOU KIDDING? THIS IS AMAZING!” Castbox is the 4th most popular podcast player in the world! This was going to be the prize to get if there were any prizes worth fighting for. Being featured on one of the leading podcast player apps has huge potential! The Google Play Store says Castbox has over 5,000,000 downloads and 80,000 ratings. And the Apple App Store has over 10k ratings for the app. Winning this could have massive impact on my podcast.

I recall the Moonshot podcast got featured in Pocket Casts and it shot them through the roof. And Castbox is more popular than Pocket Casts so this is a chance of a lifetime.

I quickly sprang into action. Writing out a few draft Tweets. Trying to word my entry just right so my followers would like and retweet and comment. I spent hours on this alone.

I analyzed when my Twitter followers engage with my posts the most, so I can pinpoint the exact time for my Tweet. I also wanted to post as early as possible when the conference started so it maximizes my time to get more likes.

The conference began, I started getting nervous with excitement. Forget about Pat Flynn or Terry Gross, I have a real shot at something big here. This was all I could focus on.

I found the Castbox booth. I confirmed the rules of the contest with the people at the booth. I’m camera shy though, so I didn’t want my real picture to be used but instead a cartoon version of me.

I was able to take a photo of their booth and all and I proceeded to insert my own cartoon version of me. I’m quick at graphic design so this took only a few minutes.

I had everything ready for my submission. I had the Tweet written, I had the image set. And it was early in the morning on the first day right about the time when my Twitter followers are most active, and I posted my Tweet.

Help me out! If you think Darknet Diaries should be featured on the @Castbox_fm podcast player, like, comment and retweet this. Thank you! #rockthecastbox pic.twitter.com/nnbK3jnEyX

Now I have 10,000 followers on my Twitter account, which comes in handy for a number of reasons, and I’m happy to share how I got that. But this is just another reason why you want a big following on social media. You never know when you need to quickly tap into your audience to get them to help you.

So as you can see, the combination of having such a big following of people who really appreciate my show, I was able to get:

But would this be enough to be the top Tweet/Facebook post?

The contest ran for 2 days. During that time I frantically checked the #RocktheCastbox hashtag over and over to watch the competition. I could hardly focus on anything else at Podcast Movement. To me this was all that mattered. And I was planning ways I could get more likes and retweets. Such as tapping into my Instagram followers, Facebook followers, or potentially emailing my mailing list. Combined I could have reached another few thousand people to ask for more help.

But almost nobody competed…

I was expecting dozens if not hundred of people to all be grabbing for this contest prize. This is a prize that can change your career! But by the time the contest ended, there were only about 12 entries!

Thousands of podcasters were in attendance and only 12 wanted to be featured in the 4th biggest podcast player? What the heck is going on?

And every other entry had less than 10 likes. So I was in first place with 102 likes, and second place had 10.

And lastly, not a single one of the entries actually asked their followers to like and help them out so they can win this prize.

Everyone on this list got their podcast promoted on Castbox. But I easily took the grand prize with almost 200 points and 2nd place having only 8 points…

I’m pretty sure anyone who would have even half tried would have gotten more than 8 points. Just tag #podernfamily in the tweet and it would have been retweeted 8 times probably.

Now Castbox is my favorite podcast app, even before this contest, because one thing I really like in particular. You can see the number of subscribers and plays for every podcast. These are just the number of Castbox subscribers, not total for all players. But still it gives you a quick sense of how popular a show is.

Before they did a full page ad on my show I had this for statistics: 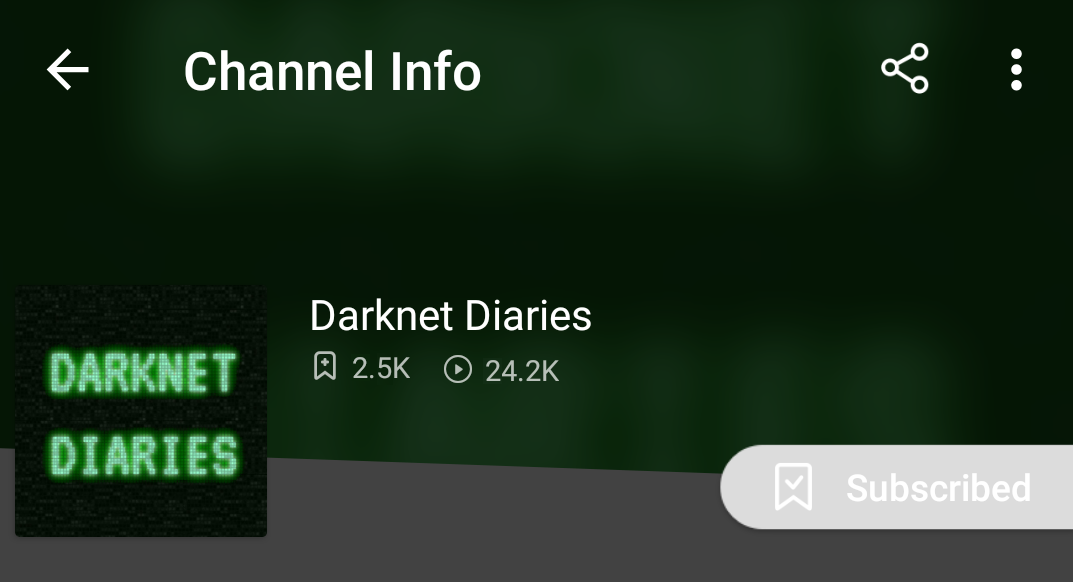 That’s 2500 subscribers before the campaign started.

I worked with Castbox to get all the advertising artwork completed and they did a full page ad of my show. I actually spent 3 days making this image because I wanted to be as intriguing as possible to get people to click the ad. I wasn’t sure how many people this was going out to, but I wanted to make it count! The ad was seen in the Castbox app on Aug 20th and it looked like this. 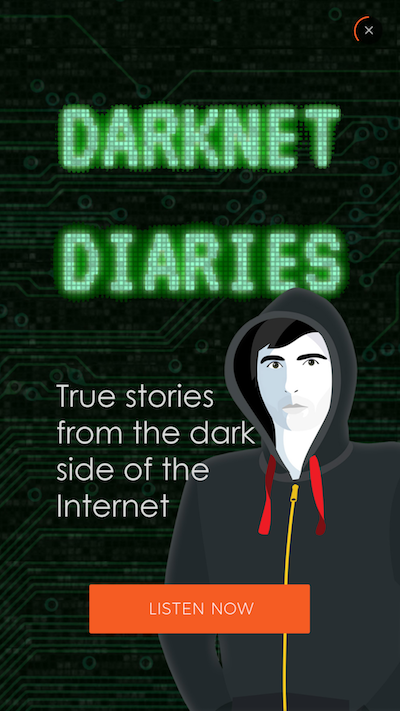 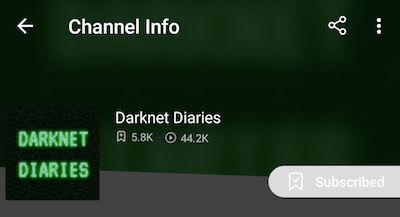 5,800! A rise in 2,300 subscribers after just one full page ad! Unbelievable! And my download numbers went way up too, indicating people are listening. Not only that, a lot of the new listeners were contacting me telling me they like the show.

But that’s not all! A push notification was also part of the prize. This would be a notification that would go out to Castbox users telling them about my show. On Sep 5th it went out and this is what it looked like: 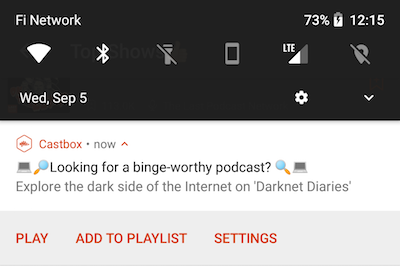 Just 4 hours later my subscriber count jumped up another 700 subscribers! And now, a few days after the notification, here’s my current stats in Castbox: 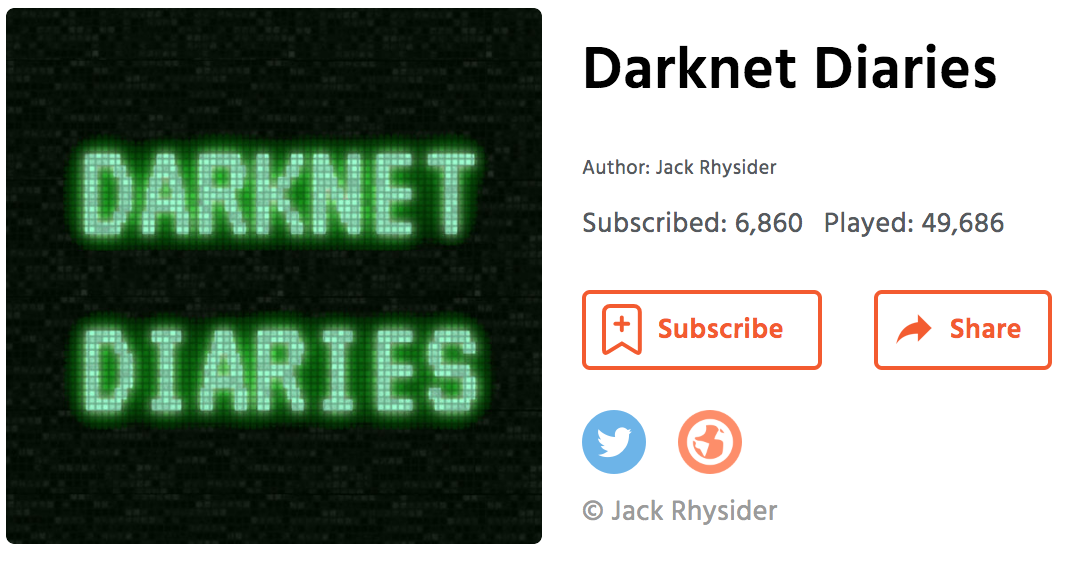 That’s a grand total of 3,300 new subscribers all from a single Tweet!

Now if you want to know what does this look like in regards to my other downloads, here is a graph. 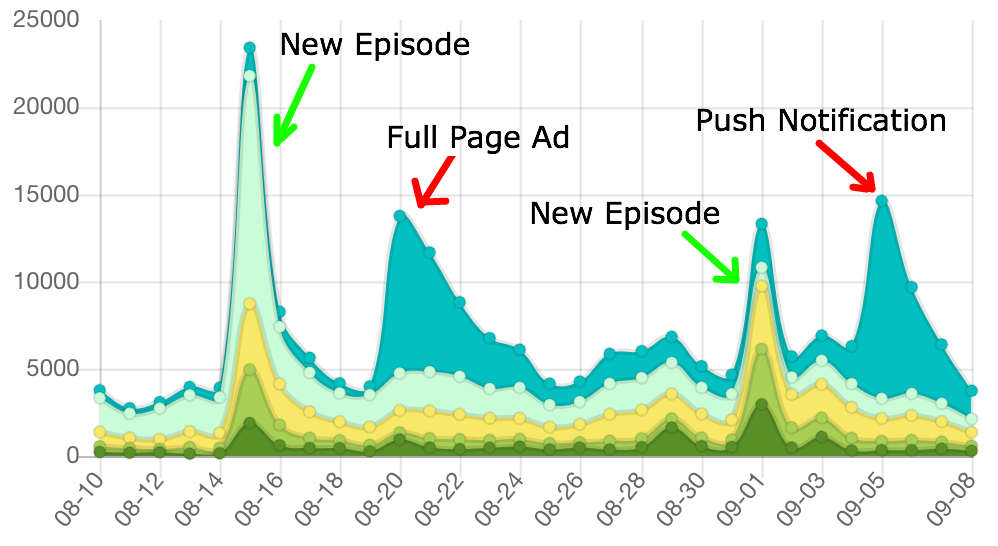 The above is a graph indicating number of downloads from the top podcast players over time. The dark blue (top stream) is Castbox downloads. You can see before Aug 20th the dark blue line was very thin. But then it explodes on Aug 20th, and then again on Sept 5th. This indicates a ton of new listeners only on Castbox and you really don’t see the other players affected by this. Now of course my goal is to now make a show good enough to retain those new listeners. But that’s beyond this blog post.

If you’re wondering if you can pay for a full page ad and push notification in Castbox, you can’t. I’ve had a few talks with Castbox since this event. They only reserve these spots for Castbox original shows, or shows in their partner networks. So even though this is a super effective way of marketing a podcast, it’s not one anyone can really go and do. But hopefully it’s a lesson to anyone reading to pay attention to opportunities like this in the future.

And at the time of this writing Castbox is currently holding another promotion which has great prizes.

Of course a big thanks goes to Castbox. But an even bigger thanks goes to all the podcasters at Podcast Movement who didn’t care to compete in this contest. Because of you I won this easily. And I’m super happy with the results. So if you went to Podcast Movement, thank you so much for not trying. This rocked!