Darknet Diaries stats and analytics for 2019

Each spike above is an episode release day. Some notable events are numbered and explained below. Overall, this has been a breakout year for Darknet Diaries. Going from the beginning of the year earning very little, to coming home strong at the end of the year with the ability to hire additional producers, artists, sound designers, an editor, and writer.

1 - In January, my downloads doubled. On the daily graph you’ll see 4 spikes, when I only put out 2 episodes. I did two episode swaps on my off weeks with Malicious Life and the Hackable? podcast. This caused a significant bump in new listeners which you can see with massive spikes. This was documented by this Pacific Content Blog. This resulted in a few thousands more subscribers.

2 - In July, Darknet Diaries was in the Sunday print edition of the New York Times listed as one of 8 recommended tech podcasts. You can see that from July on the whole chart rises up. This must mean that the NYT article had a good impact on the numbers, perhaps a few hundred more regular listeners.

2 - Also in July I produced an episode for the hit podcast Snap Judgment. Their show is many many times more popular than mine and also plays on NPR all over the country. So I got one of my stories on their podcast which introduced me to a lot of new people which is probably the real reason for the bump in July. I think this is a very effective marketing tactic, to create an episode or even segment for another popular podcast.

3 - On Aug 31, Darknet Diaries was featured on Apple Podcasts. By Sept 6th, the podcast was ranked 18 in All Podcasts on Apple Podcasts charts. I expect this resulted in a few thousand more subscribers. To become featured I promoted Apple Podcasts for months, submitted required artwork, and created a request to be featured. I lucked out when they featured me. But for the rest of 2019 the chart had a new higher baseline. Meaning I acquired quite a significant amount of new dedicated listeners.

4 - In October you see 3 spikes even though I only published 2 episodes. The 3rd spike is because I did another episode swap with the Hackable? podcast which gave around 1,000 new listeners.

5 - Nov. had a dip due to holidays (most people listen during commute to work or at work). Dec. had an extra spike but it’s because we published an extra episode.

Pocket Casts reports that Darknet Diaries was the 23rd most popular podcast of 2019 for Pocket Casts. This tells me I was probably featured on Pocket Casts at some point, but I didn’t catch it and don’t know when that happened. But if we were featured it would mean a significant number of new listeners from Pocket Casts.

Darknet Diaries won an award in June 2019. The Best new cybersecurity podcast according to InfoSecurity group. While the award is super cool and it was the first trophy I ever won for podcasting, it doesn’t look like it impacted the numbers at all.

Jack was a guest on over 13 podcasts in 2019. Many new listeners have said they started listening to Darknet Diaries after hearing Jack on other shows.

In March we ran an ad campaign in Overcast. With the following results:

The last 3 columns are: impressions, clicks, subscribers. So for $550 we got 278 new subscribers. This campaign didn’t really move the needle on our charts. So this is not a very effective way for us to market our podcast. It’s expensive and has small returns. But this was our only paid advertising we did all year, and this was only done because our ad manager bought this ad for us as an experiment to help us grow.

These are some of my more significant marketing moves for the year. But above all, none of this would have made a bit of difference if our audience didn’t love the content and help spread the word. If they listened and left, we’d see no growth. If they listened but didn’t tell others, we’d see no growth. What you don’t notice on the chart are all the thousands and thousands of listeners who stopped listening. And it was only because we had more than that start listening and stick around that we saw this growth for the year. We believe word of mouth is by far the best strategy for building a large audience.

The accomplishments above might seem like impossible to do for many people. I thought that too. In 2017 I got none of these accomplished. In 2018 I started getting some big wins like this. But now I’m coming into my 3rd year of podcasting and I’ve been working on big wins like this the whole time. I don’t think it’s luck when you see it happen to me over and over in a single year. It’s some luck ya, but at the same time people who go outside in lightning storms have a higher chance of getting hit by lightning. It’s all about persistence and knowing how to make opportunities. 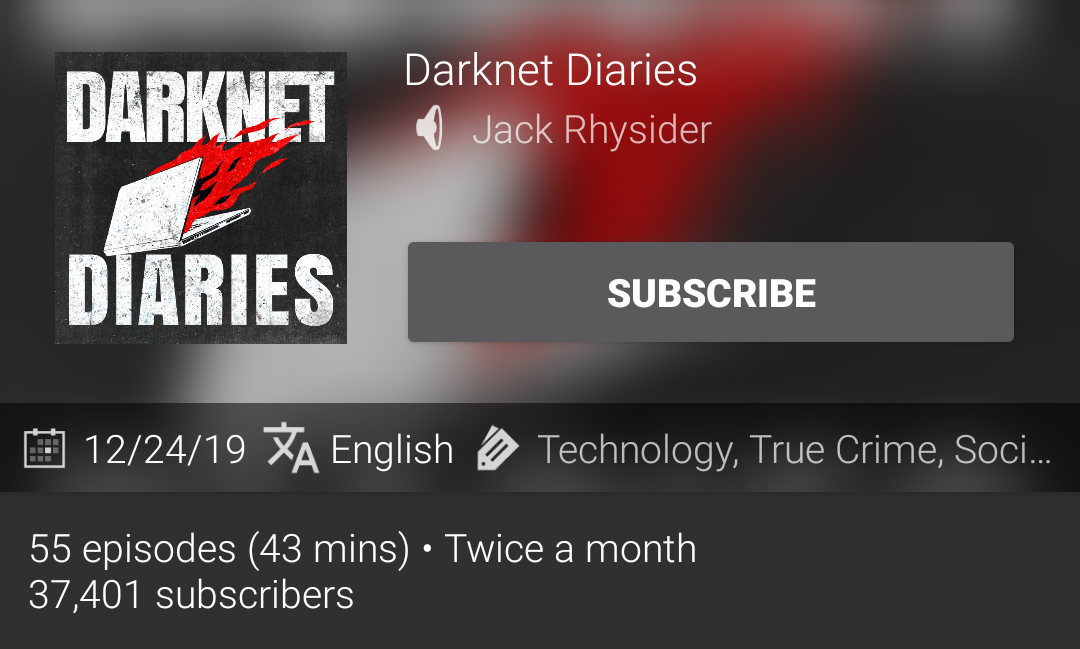 My Spotify 2019 wrapup shocked me with this: 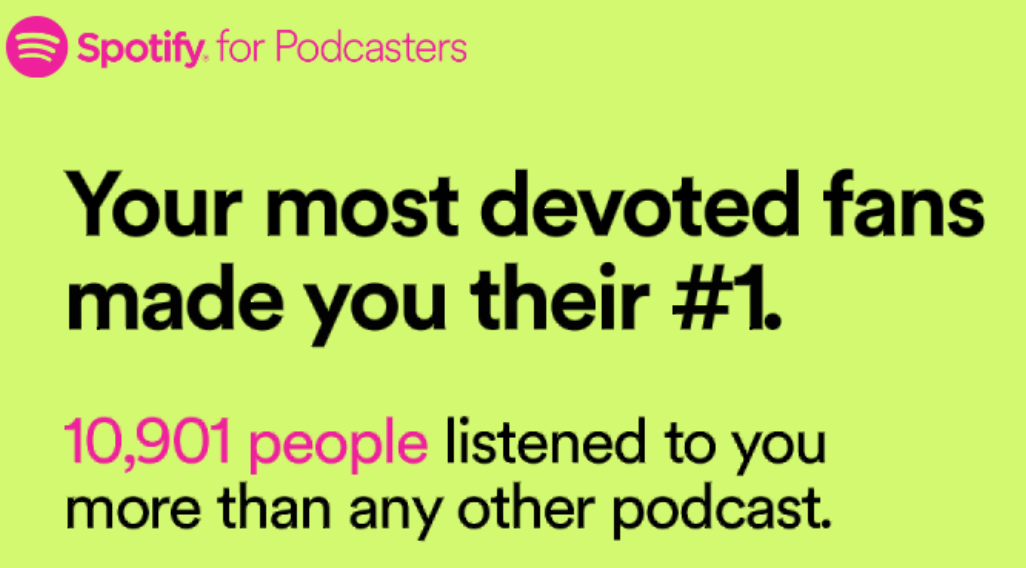 Additionally Spotify reports that Darknet Diaries has 45,281 followers (aka subscribers). This number is surprising since it’s about neck and neck with Apple Podcasts. Apple Podcasts has always been the biggest source of downloads, and I should expect Spotify to be about 5% of my downloads. But here they are about the same. I don’t think I was featured on Spotify either, and I was featured on Apple Podcasts. So it’ll be really interesting to watch these two battle it out in 2020. 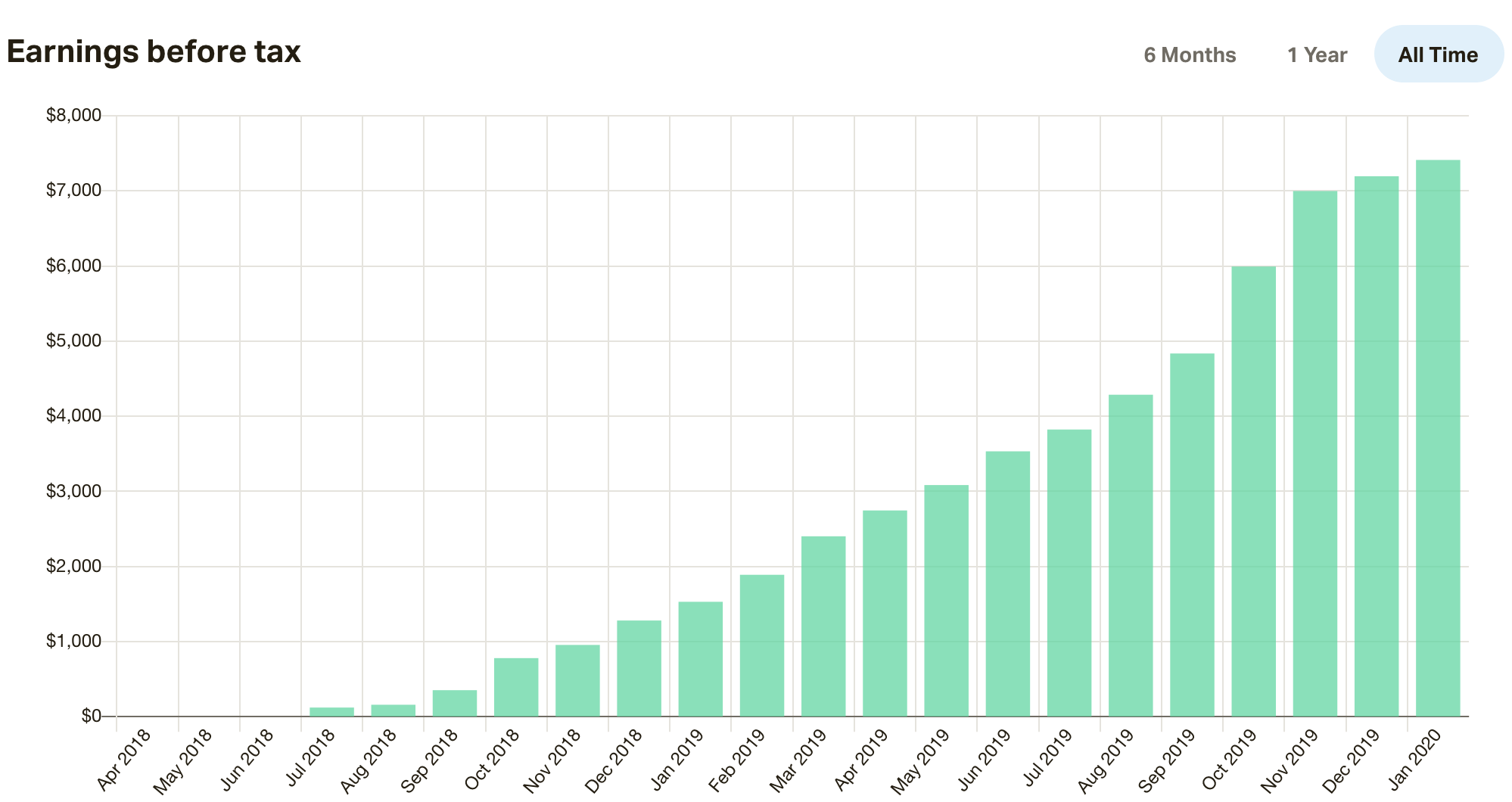 2019 saw significant growth on Patreon. Ended year with 2,272 patrons giving a total of $7,701. This year we added bonus episodes for patrons and an ad free feed which enticed a lot of people to sign up. We will definitely be focusing on getting more bonus content to patrons in 2020.

Almost 27k visitors to the website in 2019 all from social media. This is either from my social media campaigns I’ve done or word of mouth from others on social media recommending the show. Either way it’s clear that social media is a massive potential for getting new listeners. Which is why I put a lot of time and effort into growing my social media profiles and presence.